New Antivirus 2010 is a fake security application made by a script kiddie lamer. Promoted via Youtube and hosted on a free hosting service, the fake tool is coded with .NET and has a bogged interface. 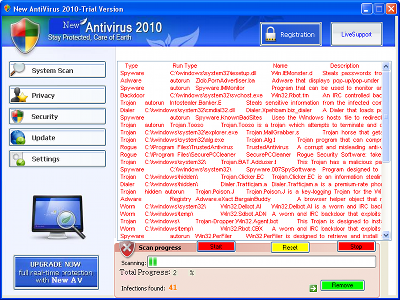 There's no way to register New Antivirus 2010, there's no registration code behind the "Activate" button. It always points to the same message: Registration failed!

If your PC is infected with New Antivirus 2010 use MBAM to remove the infection.
Libellés : Rogues, ScreenShots
Newer Post Older Post Home